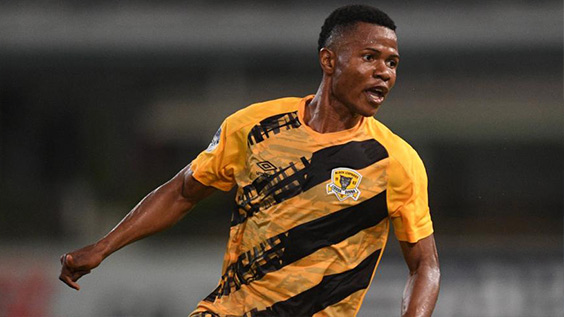 PIC: Rodrick Kabwe of Black Leopards in action against TTM

The Nedbank Cup quarterfinal draw has been made and, while not quite yet complete, includes a provincial derby and a potentially massive clash between two Premier League sides.

Here is all you need to know in your quick guide to the quarterfinal matches.

These two briefly used to share a stadium in Thohoyandou until TTM packed up shop and moved to Polokwane following the sale of their franchise to new owner Abram Sello.

It may no longer be a local derby, but there are still provincial bragging rights and, more importantly, a place in the Nedbank Cup semifinals up for grabs.

Leopards have been there twice before, in 2009 and then two years later when they reached the final as a second-tier side but lost 3-1 to Orlando Pirates.

It is the second season in a row they have made the quarterfinals, where they bowed out against another Limpopo club, Baroka FC, in 2020. The previous time before that was in 2015 when they lost, somewhat surprisingly, at home to Vasco da Gama.

TTM have reached this stage for the first time having bowed out in the second round on debut in 2019, their only other Nedbank Cup appearance.

Their talisman this season has undoubtedly been striker Thabo Mnyamane, who has scored in both rounds and lifted the Nedbank Cup with SuperSport United in 2017.

These two sides have met on five previous occasions, including a 1-1 draw in the DStv Premiership earlier this season.

They also played to a pair of draws in the 2017/18 second-tier season, and met last campaign in the PSL Promotion/Relegation play-offs, where Leopards won both matches 3-1 and 2-1.

A first meeting between the sides but Chippa United will be wary of a chequered history against teams from the lower leagues in the Nedbank Cup.

Indeed, Chippa lost their first three meetings against teams from outside the top-flight following their promotion to the league, going down to United FC (2013), Natal United (2015) and Baroka FC (2016), before finally getting their first win against Witbank Spurs the following year.

Chippa have won both their previous quarterfinals, defeating Jomo Cosmos 1-0 in 2017 and then an extraordinary 5-3 penalty shoot-out win over BidVest Wits in 2019 after the teams had played to a 4-4 draw – one of the greatest ever Nedbank Cup games.

Richards Bay have reached this stage for the first time after going out to Bloemfontein Celtic in the second round on both their previous appearances in the Nedbank Cup in 2018 and 2019.

They have already beaten top-flight opposition this season in the form of Kaizer Chiefs, and also knocked then defending champions Free State Stars out in the Last 32 in 2019.

So their record against DStv Premiership sides reads 2-2 and they will now hope to edge ahead on that score.

We are guaranteed at least one GladAfrica Championship side in the semifinals as these two second-tier sides clash in what will be a first quarterfinal for both.

Cape Town All Stars had not gone beyond the Last 32 in four previous attempts ahead of this year’s competition, but now find themselves on the cusp of arguably the club’s greatest ever achievement.

Callies are on debut in the Nedbank Cup having won promotion at the end of last season, though they are a team with a storied history having been formed in 1898, which makes them the oldest team ever to compete in the competition.

The teams met as recently as January 31 in Cape Town, where Callies came away with a 2-1 victory.

Experienced forward Waseem Isaacs had put All Stars ahead, but two goals in the final 15 minutes from Khomotso Marebane and leading scorer Pogiso Mahlangu turned the tables in the Pretoria’s club’s favour.

This tie has yet to be firmly set but as the potential to be a gigantic match-up between two of the biggest clubs in the country.

Sundowns will not be taking Last 16 opponents Polokwane City lightly, with the teams set to meet on March 10 after their original fixture was postponed due to The Brazilians’ CAF Champions League commitments.

But assuming they do come through, a clash with Pirates could be a contest for the ages with certainly no love lost between the pair in recent times.

Given the success of both teams over the years, cup meetings have actually been quite rare. There have been just two since 2011, both in the Nedbank Cup and both won by Pirates, in 2014 and 2016.

Pirates have made the Nedbank Cup quarterfinals five times since 2008, and won on four occasions. Their only defeat was to Sundowns in 2010 when they went down 3-1.