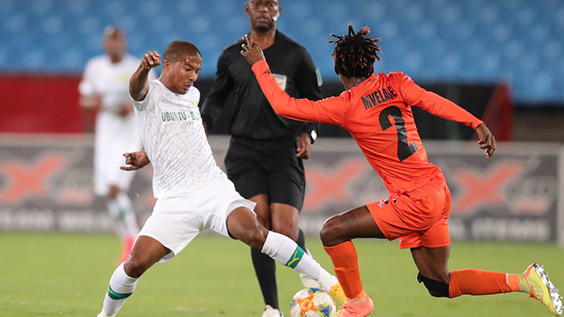 Will we see a record number of second-tier sides in the Nedbank Cup semis?

Will we see a record number of second-tier sides in the Nedbank Cup semis?

We know we will have at least one side from the GladAfrica Championship in the 2021 Nedbank Cup semifinals with Cape Town All Stars and Pretoria Callies to clash in the quarterfinals.

That will be something of rarity in recent times, with sides from outside the DStv Premiership having battled to make it to the latter stages of the competition bar the very notable exception of TS Galaxy in 2019.

We could have as many as three second-tier sides in the semis this season, with Richards Bay hoping to create an upset at Chippa United, and Polokwane City with two mouth-watering clashes before they can consider a semi place.

They must first get past Mamelodi Sundowns in the second round fixture that will be played on March 10, and if they win through that face Orlando Pirates in the quarterfinals.

Galaxy are proof that it is possible for a second-tier side to lift the trophy, but it has, over the years, been rare to see teams from the Championship make the Nedbank Cup semifinals.

Only once before have two such sides reached the Last 4, which came in 2009 as Black Leopards and University of Pretoria appeared.

AmaTuks went on to make the final but lost 1-0 to Moroka Swallows at the Rand Stadium.

Mpumalanga Black Aces (2008) and Leopards (2011) both also won semifinal matches, but they too fell at the final hurdle.

Former Galaxy coach Dan Malesela, who is now with Chippa United, has appeared in two semifinals with second-tier teams, when he led United FC (2013) as they overcame a nervous start to take Kaizer Chiefs close before losing 2-1.

He repeated the feat with Galaxy in 2019 and this time came out on the winning side as they defeated Lamontville Golden Arrows 3-1 after extra-time.

Vasco da Gama were narrow losers to Sundowns in 2015, while Baroka FC also made it a year later when they were beaten by SuperSport United.

There were therefore four teams from the second tier to make the semis in the first four years of the Nedbank Cup, but only another four in the next nine years.

Incidentally, Baroka are the only team from the third tier to make the semifinals, a feat they achieved in 2011 before losing out to Leopards on penalties following a 2-2 draw.

The exact dates, venues and kick-off times for this year’s semifinals must still be announced by the Premier Soccer League, but they are scheduled to be held on the weekend of March 13-14.