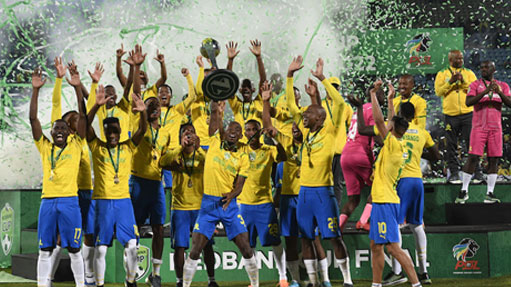 The 2022 Nedbank Cup in Numbers

The 2022 Nedbank Cup provided us with many thrills and spills over the three-and-a-half months of competition, with Mamelodi Sundowns emerging as champions as they edged Marumo Gallants 2-1 in the final at the Royal Bafokeng Stadium on Saturday.

We round up the numbers from this year’s tournament.

1 – This Nedbank Cup title is the first time Sundowns co-coaches Manqoba Mngqithi and Rhulani Mokwena have won the competition as head coaches. They were both assistants to Pitso Mosimane in 2015 and 2020.

1 – The Royal Bafokeng Sports Palace hosted the Nedbank Cup final for the first time, becoming the 11th different venue to stage the decider since 2008.

2 – Despite Marumo Gallants’ loss, they will represent South Africa for the second season in a row in the CAF Confederation Cup. This is because Sundowns have qualified for the CAF Champions League and will take part in that competition.

2 – Only two players were sent-off in the Nedbank Cup this season (down from nine in 2021) and both came from Gallants! Katlego Otladisa was red-carded in the semifinal win over TTM and Ndabayithethwa Ndlondlo in the final versus Sundowns.

3 – Ndabayithethwa Ndlondlo is the third player to be sent off in a Nedbank Cup final, and the first for a decade. Moses Kwena was the first when he saw red for Black Leopards after 84 minutes against Orlando Pirates as they lost the 2011 decider. Clayton Daniels was sent off after just 19 minutes for Sundowns as they lost to SuperSport United the following year.

3 – This was the first time in five seasons that there was more than one goal scored in the Nedbank Cup final. The previous four deciders all finished 1-0 as Free State Stars (2018), TS Galaxy (2019), Sundowns (2020) and Gallants (2021) claimed victory. There were three goals scored this year.

4 – Gallants striker Sede Dion was the top-scorer in the 2022 Nedbank Cup with four goals, including the equaliser in the final. It is the same number netted last season by Peter Shalulile from Sundowns, but well short of the competition record of 10 set by Sundowns’ Nyasha Mushekwi in 2012.

4 – The final defeat was just a fourth outright loss in 23 Nedbank Cup games for Gallants coach Dan Malesela. And he was just a minute away from avoiding this one.

5 – This was the fifth Nedbank Cup final for Sundowns, who have now appeared in more than any other club. SuperSport United and Orlando Pirates have both appeared in four since 2008.

6 – The biggest win in this season’s Nedbank Cup came as Sundowns defeated Free State ABC Motsepe League side Mathaithai 6-0 in the Last 16. It is also the most goals scored in a single game, matched by the 3-3 draw between Venda Football Academy and University of Pretoria in the Last 16.

6 – There were six penalty shootouts in the Nedbank Cup this year (down from nine in 2021), but none beyond the Last 16. All the games after that were settled before spot-kicks were needed, though we came close in the final!

14 – The final win extends Sundowns’ record unbeaten run in the Nedbank Cup to 14 games dating back to the Last 32 in 2019. By the time the next tournament is played in 2023, they will have not lost a fixture outright in four years!

19 – The numbers of goals scored by Sundowns in this season’s competition. It is the most by a side since they netted 30 goals in the 2012 campaign, which was boosted by their famous 24-0 victory over Powerlines FC.

31 – Sundowns used an astonishing 31 different players in their five games as they mixed and matched the team, using their big squad to their full benefit. No player featured in all five games in 2022. By contrast, Gallants used only 21 players.

50 – Gallants coach Dan Malesela now has a 50% record in Nedbank Cup finals. He lifted the trophy in 2019 with second-tier TS Galaxy, but lost the 2022 edition this past weekend.

67 – There were 67 different goal-scorers in the 2022 Nedbank Cup, which is 10 more than last year. Four of those were own goals though from Tumelo Bodibe (Black Eagles), Sipho Maluleke (Baroka FC), Relebogile Mokhuoane (Cape Town City) and Luvolwethu Mpeta (TTM).

81 – There were a total of 81 goals scored in the 31 Nedbank Cup matches this season, one more than in the 2021 campaign! That is an average of 2.61 per game, which is a healthy number for competitive football.

120 – Thapelo Morena’s winner for Sundowns was the latest goal ever scored in the Nedbank Cup final, coming in the 120th minute and just as penalties loomed.

510 – Gallants midfielder Miguel Timm featured in the most minutes in the Nedbank Cup this campaign, the only player to play in every possible minute of the season.