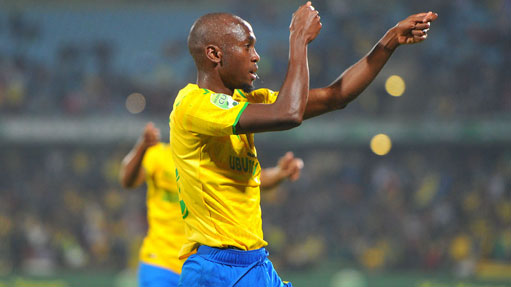 Thapelo Morena scored in the last minute of extra-time as Mamelodi Sundowns completed a clean sweep of domestic trophies this season with a 2-1 victory over Marumo Gallants in the final of the 2022 Nedbank Cup at the Royal Bafokeng Sports Palace on Saturday.

Peter Shalulile had earlier put Sundowns in front with his 30th goal of the season in all competitions, before Sede Dion moved to the top of the Nedbank Cup scorers list this campaign with a fourth for Gallants.

That took the fixture to extra-time, where Gallants were reduced to 10 men with a second booking for last season’s final hero Ndabayithethwa Ndlondlo, before Morena swept in the winner just as penalties seemed as though they would be needed.

It is a fourth Nedbank Cup title for Sundowns, and a sixth overall in the competition, while they also lift the trophy for the second time in three seasons.

It completes a ‘Treble’ for the side after they also won the DStv Premiership and MTN8 this term, another sign of their complete dominance of the local game that looks set to continue for a number of years to come.

But it was heartbreak for Gallants coach Dan Malesela, who lifted the Nedbank Cup with second-tier TDS Galaxy in 2019, but could not win a second title.

Gallants had a strong shout for a penalty in the opening stages when Sundowns defender Grant Kekana tussled with Sibusiso Sibeko in the box and appeared to catch the back of the Gallants’ man’s calf, sending the winger to the turf.

But referee Masixole Bambiso felt there was not enough contact to award a spot-kick.

Gaston Sirino had the ball in the back of the net, but the goal was ruled pout after Shalulile was adjudged to have committed a foul in the build-up. It looked another 50-50 call.

Shalulile gave Sundowns the lead on 33 minutes, profiting from an error from Gallants goalkeeper Washington Arubi as his weak punch went straight to the Sundowns striker.

Shalulile still had work to do as he beat one defender and lifted the ball over the keeper, also beating two defenders on the line.

Sundowns created a number of chances after that to make the game safe but paid for that profligacy when they conceded an equaliser, though there was a hint of offside about the goal.

Sede Dion, who had only been on the pitch three minutes after coming on as a substitute, was set up by a header from Ndlondlo, who had himself scored the winner for Gallants in last year’s final against Chippa United.

Replays showed that Dion was likely just offside as Ndlondlo flicked the header to him, but the official’s flag stayed down and the game went to extra-time.

A bit of the fizz went out of the contest as the players tired, but Lyle Lakay had a free-kick saved, before Gallants were reduced to 10 men.

Ndlondlo was booked twice in extra-time, and could have no complaints about either, as he saw red on his birthday.

The winning moment came as Gallants struggled to clear a cross into the box and the ball fell to Morena, who calmly stroked it into the net.