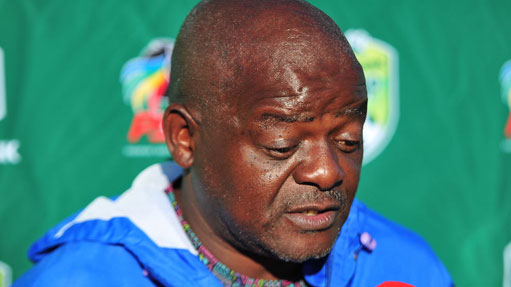 Holders Marumo Gallants are seeking back-to-back trophy wins in the Nedbank Cup but come up against ‘Treble’ chasing Mamelodi Sundowns in the 2022 decider at the Royal Bafokeng Sports Palace on Saturday.

The Brazilians will be many people’s overwhelming favourites for the title but write off the well-organised and gritty Gallants at your peril, with their coach Dan Malesela very much a man for the big occasion.

Here are the thoughts of Malesela and goalkeeper King Ndlovu ahead of the showpiece final.

What is your assessment of your chances against this Sundowns team?

"Beating the number one team in the country now? Everybody can argue but they are [the best], they won the league before the league even ended. It takes a good team to do that; it takes a magnificent team to be able to win the league way before the league ends. Even [against Royal AM], they didn't say, 'we are champions, let it go'. We are dealing with a team that is so professional."

Your form has been indifferent going into the final …

“It’s been kind of a good and bad season, good that we started very well ... even after the [festive season] break we did well. And then we started drawing a lot of matches and losing some, which is bad. The good again is that we got ourselves into the final of the Nedbank Cup, so that’s the kind of the season we have and I’m hoping that we will conclude it with a [win].”

What is the atmosphere like in the squad this week, with some players knowing this may be their last game for the club?

“We have already looked at who we must keep, and we have released some of the players but we can’t reveal that at the moment, it might upset the system. We want everybody to have a friendly environment for the whole week and try to be as happy as possible. We try to keep harmony within the squad and see how we build morale. One of the best things you can do in football is to have a good atmosphere approaching finals. So we will try to build on that.”

What is the mood amongst the players going into the Nedbank Cup final?

"We know that we're underdogs and nobody is giving us a chance. The most important thing for us is to trust in ourselves and believe that we can do it. We've got some quality players in the team to get us through the line. We also have experience, so we're confident that we can go through. The last few games of the league were a wonderful practice for this game."

You knocked Sundowns out in the semifinals last season on penalties. Do you see it going that far again?

"We are not thinking that far. Obviously, penalties are a lottery but we want to complete the game in 90 minutes. We've got the quality to do that, so we'll give it a good fight. Discipline and belief will be key on Saturday for us. We know if we're disciplined and believe that we can win, anything is possible."

You have been nominated for Player of the Tournament in the Nedbank Cup. That must give you a massive psychological boost going into the final?

"It's wonderful to be nominated for the Player of the Tournament accolade. It's not easy for a goalkeeper to be nominated among outfield players, so it's a proud moment for me and I fully deserve the nomination because I did well.”