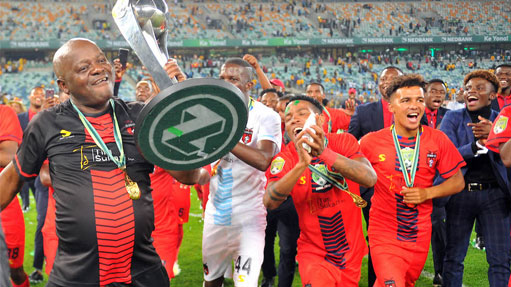 Only Stuart Baxter and Pitso Mosimane have claimed the Nedbank Cup title as a coach more than once since 2008, but that could change in this year’s final as a past winner seeks more glory.

Dan Malesela took TS Galaxy to an unlikely 2019 final triumph over Kaizer Chiefs, and has now returned for more in the colours of Marumo Gallants.

They will take on Mamelodi Sundowns in the May 28 decider at the Royal Bafokeng Sports Palace, with Malesela hoping to add to that exclusive list of multiple winners.

The Sundowns co-coaching duo of Manqoba Mngqithi and Rhulani Mokwena have both tasted Nedbank Cup success as assistants to Pitso Mosimane, but are looking for their first triumph as head coaches.

Here is the list of Nedbank Cup winning coaches since 2008 and how their success was achieved.

Moloto took over at Sundowns from Gordon Igesund in February 2008, just a month before they started their Nedbank Cup campaign. He saw them past both SuperSport United and Kaizer Chiefs, before a meeting with National First Division side Mpumalanga Black Aces in the decider. Lerato Chabangu scored a late winner for The Brazilians as they lifted the trophy.

This would prove to be the final game in charge for the Brazilian Leal, who was axed despite his side lifting the Nedbank Cup trophy, paying the price for some indifferent league form. He got his team to the final where they faced NFD side University of Pretoria, and had too much for the second-tier outfit as another Brazilian, Vinicius Da Silva, scored the only goal of the game.

De Sa led Wits to a surprise final appearance with a young team that was by no means the finished article. They faced off against AmaZulu and in a tight game, vanquished their opponents 3-0 after late goals from Sifiso Vilakazi (two) and Brazilian Fabricio Da Silva. The scoreline looks one-sided, but Wits netted all their goals late on.

Another coach who won the Nedbank Cup and left immediately afterwards, Dutchman Krol led his Pirates team to the League and top eight trophies as well, but did not have his contract renewed. Pirates went behind in this final against NFD side Black Leopards, but stormed back to win 3-1 thanks to goals from Thulasizwe Mbuyane (two) and Isaac Chansa.

This was the first of three finals in a row for Hunt and his SuperSport side easily defeated Sundowns 2-0 as Thabo September and Kermit Erasmus netted second half goals. He would return in 2013, only to see SuperSport lose 1-0 to Kaizer Chiefs, and then following a switch to BidVest Wits, led the latter to the 2014 final as well, where they were beaten 3-1 by Orlando Pirates.

Baxter started like a house on fire in his first spell at Chiefs, pulling off the ‘Double’ in his first season as he ended it with the Nedbank Cup trophy following a 1-0 win over SuperSport. Bernard Parker got the only goal of the game in extra-time as the AmaKhosi denied Matsatsantsa back-to-back trophy wins.

Pirates had already advanced past the Last 32 of the Nedbank Cup when Vermezovic, who also spent nearly three seasons at Chiefs, arrived at the club. He promised his players that if they reached the final, he would ensure they won it and so it proved as they roared back from a goal down to beat Wits 3-1 with Kermit Erasmus (two) and Sifiso Myeni on target.

Mosimane had already lifted the trophy with SuperSport in 2005, and edged to another win with Sundowns as they defeated De Sa’s Ajax Cape Town in the decider in a penalty shoot-out following a 0-0 draw. Abbubaker Mobara had a chance to win it for Ajax during the spot-kicks, but missed and Sundowns won the day as they repeated their 2008 success.

Baxter had only been at SuperSport a matter of months when he led them to the Nedbank Cup trophy, defeating Pirates 3-2 in the final. After going a goal down, his side stormed into a 3-1 halftime lead as Jeremy Brockie, Bradley Grobler and Michael Boxall all found the net to give Baxter his second trophy win.

Baxter helped SuperSport retain the Nedbank Cup title with a thumping 4-1 victory over Pirates in the decider. Bradley Grobler got two, with Jeremy Brockie and Kingston Nkhatha also on the scoresheet. It meant that Baxter did not lose a Nedbank Cup fixture in his 18 months in charge at SuperSport.

Belgian coach Eymael guided Free State Stars to the final, where they met Maritzburg United at the Cape Town Stadium. The latter were probably the slight favourites, but it was Stars who triumphed in the decider as they provided a tactical masterclass to keep the KwaZulu-Natal side at bay. Goodman Dlamini scored the winning goal in a 1-0 success for Ea Lla Koto.

Malesela adds to the list of individuals to have won the Nedbank Cup competition as both a player and a coach, guiding second-tier TS Galaxy to a shock victory over Soweto giants Kaizer Chiefs at the Moses Mabhida Stadium in Durban. It was without doubt the pinnacle of his coaching career to date and his magic moment was sealed by a late Zakhele Lepasa penalty.

The final would be the last game in charge for Mosimane at Sundowns before he left for Egyptian giants Al Ahly, but he sealed a ‘Treble’ of trophy wins in the 2019-20 season for the Tshwane side. They met Bloemfontein Celtic in the decider at the Orlando Stadium, with Gaston Sirino netting a superb winner 10 minutes from the end.

Keer had been brought to TTM to save them from relegation, so it was an added bonus when he led the team to the Nedbank Cup decider, beating Sundowns in the semifinals. They faced Chippa United and a lone strike from Ndabayithethwa Ndlondlo won the day for the Limpopo side. They are appearing again in the final this year as Marumo Gallants.