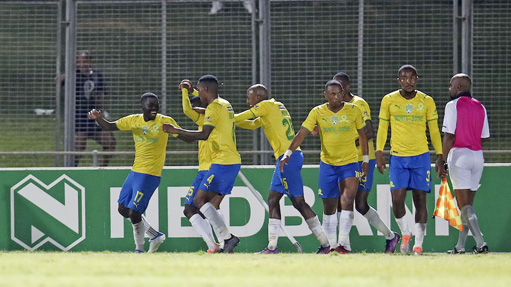 Aubrey Modiba and Pavol Safranko scored for Mamelodi Sundowns as they sealed a place in the final of the Nedbank Cup with a 2-1 victory over hosts Royal AM at the Chatsworth Stadium on Saturday.

Sundowns will now meet holders Marumo Gallants in the May 28 decider, which will be played at the Royal Bafokeng Sports Palace in Phokeng, the first time the Nedbank Cup final has been staged at this 2010 FIFA World Cup venue.

It was an evenly contested semifinal with Royal AM, a game between the top two teams in the DStv Premiership table. For the hosts it was a first loss in Durban since August, ending their run of 14 games unbeaten.

The result keeps Sundowns on course for the domestic treble, having already secured the league title and the MTN8, and is a second Nedbank Cup final in three years.

They defeated Bloemfontein Celtic 1-0 in the 2020 decider with, ironically, a number of the Royal AM players having featured in that game after the club bought Celtic’s topflight status at the start of this season.

The Brazilians will hope to add to their other wins in 2008 and 2015, and look to end the reign of Gallants, who won last season’s decider against Chippa United.

There was little in the way of goal-mouth action in the first half though both sides signaled their intention to attack.

Sundowns were denied a penalty just past the hour-mark when Safranko was bundled over just inside the box. Referee Victor Hlungwani was sure it was a foul, but after consulted his assistant referee, ruled the first contact was outside the box. He was wrong.

But from the resultant free-kick they took the lead as Modiba saw his shot go through the wall and deflect into the net, leaving home goalkeeper Hugo Nyame with no chance.

The home side were level 10 minutes later and it was veteran Matlaba who blasted a shot past Sundowns keeper Denis Onyango. The latter should have done better with a shot that was directly at him but burst through his defences.

It was a first goal in a Royal AM shirt for Matlaba and came at the delight of the sizeable home crowd.

But that joy lasted just three minutes before Sundowns took the lead again as Royal AM pressed the self-destruct button.

Nyame and defender Tshepo Rikhotso tried to pass out from the back, but when Peter Shalulile blocked Nyame’s pass as the latter dallied on the ball, it fell to Safranko, who applied a calm finish.

That strike took Safranko to three goals in the competition and joint top of the scorers’ charts along with Marumo Gallants’ Sede Dion and Wonderboy Makhubu from University of Pretoria.