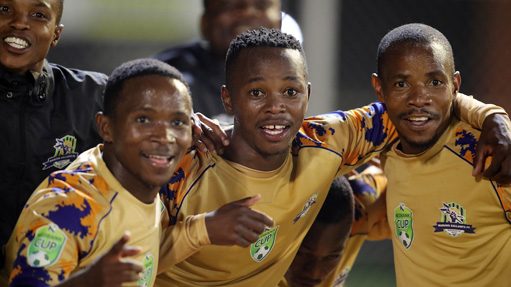 Holder Marumo Gallants have sealed a second successive Nedbank Cup final after a narrow 1-0 victory over second-tier TTM in their semifinal clash at the Thohoyandou Stadium on Friday night.
An own goal from TTM’s veteran defender Luvo Mpeta gifted Gallants passage into this year’s decider, which is scheduled to be played on May 28.
Gallants become just the second club to make back-to-back Nedbank Cup finals after SuperSport United (2012 & 2013, 2016 &2017), though last season they campaigned under the name TTM when they beat Chippa United in the final at the Free State Stadium.
It is also a second final for Gallants coach Dan Malesela, who led then second-tier TS Galaxy to the title in 2019 as they stunned Kaizer Chiefs in the final.
TTM defender Biodun Alabi was a tad fortunate not to see red with a stubs-up challenge on Gallants forward Sede Dion early in the game. Dion, who has three goals already in the competition, was forced off shortly afterwards with what looked like a groin injury.
Home forward Rhulani Manzini had a few chances to give his side the lead, whistling a free-kick wide of the post and then heading over from a corner when he should have hit the target.
Manzini came even closer when his free-kick late in the first half cannoned back off the crossbar, much to the dismay of the vocal home crowd.
At the other end, Tshepo Gumede put a header from a corner onto the roof of the TTM net.
The visitors took the lead on 64 minutes through slightly fortuitous circumstances as Thato Khiba’s cross from the right as deflected into his own net by the unlucky Mpeta.
Gallants were reduced to 10 men on 82 minutes when winger Katlego Otladisa was shown a red card for a poor foul, but the visitors were able to hold on for the win.
The second semifinal will be played on Saturday when Royal AM host Mamelodi Sundowns at the Chatsworth Stadium in Durban.
Royal AM are seeking a first ever Nedbank Cup final appearance, while Sundowns have reached the decider on four previous occasions, winning the trophy in 2008, 2015 and 2020.
They are hoping to complete a domestic treble after claiming the DStv Premiership and MTN8 already this campaign.