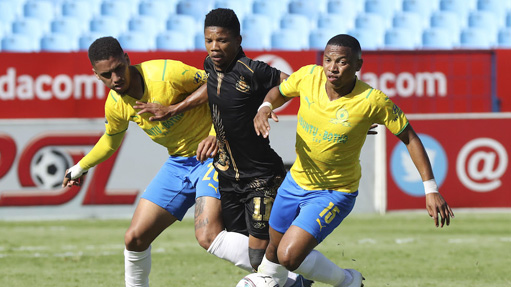 Royal AM will host Mamelodi Sundowns in their Nedbank Cup semifinal at the Chatsworth Stadium on Saturday, a clash between arguably the two form teams in the PSL this season.

There will be plenty of areas on the field where the game could be one or lost, so winning the individual battles will be key to overall success.

We look at three key match-ups that could be crucial in deciding the outcome.

An injury in midweek to Rushine de Reuck means Mosa Lebusa is likely to be restored to the Sundowns backline for the clash with Royal AM and that means trying to keep Victor Letsoalo quiet. The Bafana Bafana forward has scored 16 goals in all competitions this campaign, easily the best tally of his career. He also netted a brace when these teams met in December in the league. But Lebusa has been one of the most consistent defenders in the PSL this season, when he has been fit. Persistent injuries have limited him a bit, but he is now back fit and ready to take Sundowns to a domestic treble.

One huge contest in the game will be the battle for midfield supremacy. The team that is on top in the middle of the park is well on the way to victory. Jali is an old campaigner and full of experience and guile, and is arguably having among the best seasons of his career. He is expert at breaking up the play of the opposition and getting his team quickly onto the front foot. Mahlasela struggled for game time at Kaizer Chiefs in the past, but he has found a happy home with Royal AM and has certainly been the catalyst for their incredible season. He is more of a playmaker than Jali, and has the ability to cut the Sundowns defence open with his vision and football intelligence.

Brazilian centreback Nascimento left Sundowns in January in a move that surprised even him. But Royal AM were quick to snap him up and he slipped seamlessly into their team. He will provide great knowledge on how to beat Sundowns, having spent five-and-a-half seasons at Chloorkop, and trained every day with the players until just a few months ago. He will be well aware of the danger of Sundowns forward Peter Shalulile, who has netted 27 goals in all competitions this season and is a most deadly finisher. Nascimento must overcome a slight knock to play, but hopefully he is fit for what will be an epic battle.