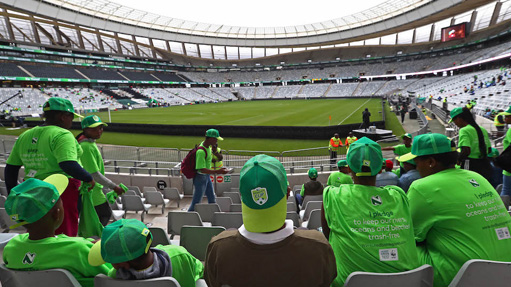 One of the questions that will be answered soon is just where the 2022 Nedbank Cup final will be staged.

Nedbank has been a leader in taking football around the country, with no less than 10 different final venues used in the past 14 years.

But selecting a stadium to host the decider is not as cut and dried as it might seem and there are a number of factors at play.

The first of these is that it is usually in a neutral province, unless both teams are from the same province. An example of this would be the Orlando Stadium, which in 2012 hosted SuperSport United defeating Mamelodi Sundowns.

The only other time the final was staged in Orlando, it was not a neutral venue, though there were extenuating circumstances.

This was for the 2020 decider when Sundowns beat Bloemfontein Celtic, but domestic football was being played in the Gauteng bio-bubble and so organisers had no other choice.

Other occasions when it was not a neutral venue was in the inaugural season in 2008 as Sundowns beat Mpumalanga Black Aces at the Johannesburg Stadium, and in 2010 when the newly rebuilt FNB Stadium played host to BidVest Wits against AmaZulu.

It was a match to showcase the new venue and South Africa’s readiness for the FIFA World Cup that was to be played that year.

That shows it is not a hard and fast rule, and sometimes there are other factors that make a particular stadium the most viable candidate.

There are still three of the venues used for the 2010 World Cup that have not hosted the Nedbank Cup decider since 2008 – Ellis Park in Johannesburg, Loftus Stadium in Pretoria and the Royal Bafokeng Sports Palace in Phokeng, near Rustenburg.

This year’s decider is scheduled to be played on May 28, with the final line-up to be decided this weekend.

Second-tier TTM play host to holders Marumo Gallants in the first semifinal on Friday, before Royal AM clash with Mamelodi Sundowns in the second semi the following day.