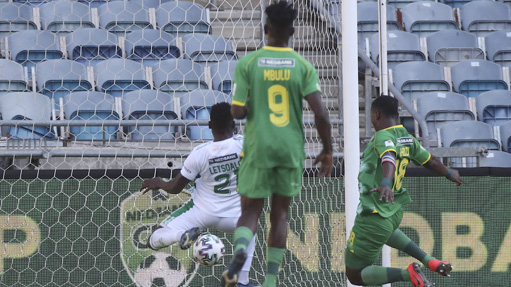 Players to have netted Nedbank Cup semifinal goals in the past

PIC: Victor Letsoalo dives in to score for Bloemfontein Celtic in 2020

No player has scored more than two goals in the Nedbank Cup semifinals since the competition was first played in 2008, but there have been some memorable performances to enjoy.

Ten players have managed to score twice at this stage of the competition, some in a single game and others in two or more semifinals played. This includes two such instances in 2020.

Bloemfontein Celtic’s Victor Letsoalo netted twice in the 3-0 victory over his former team Baroka FC that saw his side into their first Nedbank Cup final in 2020.

He will be desperate to add to that tally for Royal AM this season when he lines up against Mamelodi Sundowns.

Brazilians striker Kermit Erasmus scored a brace in a Nedbank Cup final for Orlando Pirates in 2014, but both of his semifinal goals came in the colours of SuperSport United.

He will also be looking for some more semifinal joy having gone on a good run of scoring of late, this time in the colours of Sundowns.

And Zimbabwe international striker Terrence Dzvukamanja netted twice for BidVest Wits two years ago, but they ended up on the losing side as they went down 3-2 to Sundowns.

Mark Haskins netted a semifinal brace for Wits against Free State Stars as they lifted the trophy in 2010, while Stars have a brace of their own as Harris Tchilimbou took them into the 2018 decider that they won against Maritzburg United.

In all, 65 players have scored in the Nedbank Cup semifinals, at the right end at least, with a further two own goals by the unfortunate Mario Booysen (Maritzburg United) and Lucky Mohomi (Free State Stars).

Gaston Sirino and Lyle Lakay are the others among The Brazilians’ scorers in the famous yellow jerseys.

Royal AM have a few semifinal scorers themselves aside from Letsoalo, including one player who netted at this stage for Sundowns! Brazilian defender Ricardo Nascimento spent a number of years at Chloorkop but left the club in January for Royal AM.

Veteran forward Ndumiso Mabena is another after he netted for Celtic in 2020.

Neither TTm or Marumo Gallants have anyone on their squads who have scored at this stage of the competition before.