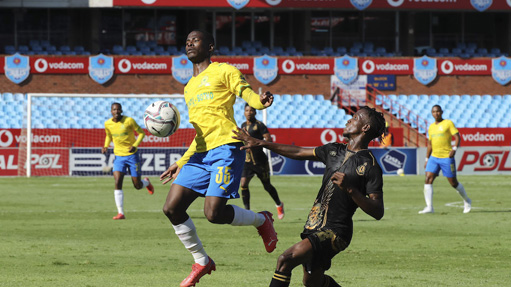 PIC: Neo Maema of Mamelodi Sundowns challenged by Kabelo Mahlasela of Royal AM

The semifinal draw for the Nedbank Cup has been made and there are two intriguing ties as Royal AM host the might of Mamelodi Sundowns, while the last remaining lower league side, TTM, welcome provincial rivals Marumo Gallants, the defending champions.

A final before the final?

There will be plenty of sideshows to the crunch semifinal between ambitious Royal AM and Mamelodi Sundowns that will be played in Durban on a ground where the home side have made themselves unbeatable in the last eight months.

It pits top against second in the DStv Premiership, and two teams who at their free-scoring best are a joy to watch.

Had the fixture been in Tshwane then Sundowns would be heavy favourites, but since it is in KwaZulu-Natal, that swings the pendulum considerably.

Royal AM have not lost at home since August, a run of 13 games in which they have won 11 and drawn two. Only Baroka FC (1-1) and Lamontville Golden Arrows (0-0) have escaped with something in that time. Since meeting the latter, Royal AM have won six in a row at the Chatsworth Stadium.

Their coach John Maduka will also have revenge on his mind. He was in charge of the Bloemfontein Celtic side that lost the 2020 Nedbank Cup final to Sundowns, and a few months later the decider of the MTN8, twin disappointments in quick succession.

The match is a first semifinal for Durban side, but Sundowns have been to this stage seven times before since 2008, including last year when they were surprisingly ousted by TTM (now Marumo Gallants) on post-match penalties after a 0-0 draw.

Other semifinal defeats came in 2010 to AmaZulu (1-1) on penalties and Maritzburg United (1-3) in 2018. Can Royal AM make it a hat-trick for KwaZulu-Natal sides?

Their 5-0 quarterfinal victory over Summerfield Dynamos extended their own unbeaten record in the Nedbank Cup to 12 games. They have now scored 15 goals in three games in this year’s competition without conceding, though this is the first time they will meet top-tier opposition.

Sundowns have already reached a record 50 games in the competition since 2008 – more than any other side. They also have the most wins (37) and goals (112). They have drawn four and lost nine of the remaining 13 matches.

Victor Letsoalo’s brace for Royal AM in their quarterfinal win over University of Pretoria means he is now the leading scorer in the competition for the club. Their eight previous goals had all been spread around the team.

The two teams have met once before, earlier this season in the league when Sundowns triumphed 3-2. The reverse fixture in Durban is set for May 21, the last round of the league championship.

There is a semifinal match-up to confound the historians in decades to come as TTM host Limpopo rivals and defending champions Marumo Gallants in what should be a fierce battle at the Thohoyandou Stadium.

When Gallants lifted the trophy last season, it was they who were called TTM, having started out the season with the owners of the current club going by that name.

The status was sold in January 2021, but as teams cannot change a name midway through the season, they had to stick with TTM until the end of the campaign, which included their 1-0 Nedbank Cup final win over Chippa United.

Now the ‘new’ TTM will be hoping to get their name on the trophy for the second year running, even though it will be two completely separate clubs who just happen to share the same name.

Gallants’ hard-fought quarterfinal win over another Limpopo side, Baroka FC, means they are now unbeaten in eight games in the competition, and it was another triumph for coach Dan Malesela.

He reached a fourth semifinal after leading United FC (2013), Chippa United (2017) and TS Galaxy (2019) to this stage previously. He also led Chippa to the Last 4 in 2021, but left the club before the fixture was played, so technically has reached the semifinals five times before.

He led second-tier TS Galaxy to the trophy as they defeated Kaizer Chiefs in the final three years ago and clearly has a knack in this competition. He has only lost three ties outright in 22 matches.

Gallants’ forward Sede Dion is the joint top-scorer in this year’s competition with three goals, having netted a brace in the Last 32 against Santos and then grabbed the winner against Baroka.

TTM staged a remarkable comeback from two goals down to defeat top-tier SuperSport United in the last round and in doing so inflict a first ever defeat against lower league opposition on Matsatsantsa.

It was the second time they have ousted a DStv Premiership club this season after advancing past Lamontville Golden Arrows on penalties in the Last 32 after the teams had played to a 1-1 draw.