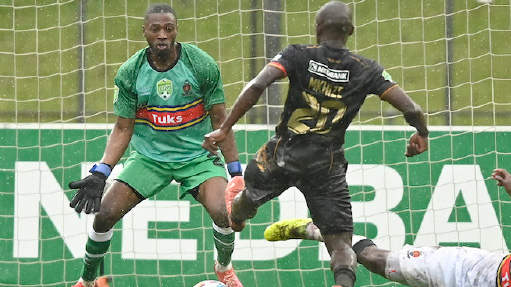 PIC: Zukile Mkhize of Royal AM FC takes a shot

Come-back kings Royal AM rallied from two goals down to defeat second-tier University of Pretoria 3-2 right at the death of their Nedbank Cup quarterfinal at a rain-soaked Chatsworth Stadium on Sunday.

Royal AM will host Mamelodi Sundowns in the first of the semifinal matches, while TTM will entertain holders Marumo Gallants.

The match between Royal AM, who have a reputation for late goals, and AmaTuks was played in treacherous conditions as the rain pelted down and water settled on the surface of the pitch.

Wonderboy Makhubu scored a brace of goals to put the GladAfrica Championship side 2-0 to the good, but when in-form Victor Letsoalo grabbed a brace of his own, the scores were level.

It looked as though the tie would go to extra-time, but Mfundo Thikazi scored a dramatic winner in the 94th minute.

It was heartbreak for AmaTuks, who were excellent in parts of the match and they will now be left to concentrate on their promotion push for the rest of the season.

Makhubu scored his first with a close-range header from Malesela Chokoe’s cross  that left Hugo Nyame in the home goal with no chance.

His second was after a concerted bit of AmaTuks pressure, the ball falling to him in the area and he rifled a shot into the bottom corner of the net.

But the home side found a way back into the game when they were awarded a penalty just before the hour-mark. Letsoalo was brought down by AmaTuks goalkeeper Dumisani Msibi, a former player with Royal AM, and he picked himself up to convert the spot-kick himself.

From then on in, the home side piled on the pressure and it seemed only a matter of time before they found an equaliser.

It was Letsoalo who struck again, driving in a low shot in a cluttered penalty area to beat Msibi with 12 minutes remaining.

And just as an extra 30 minutes loomed, Thikazi scored his second goal in three games with a simple finish at the back post after being set up by Sedwyn George.