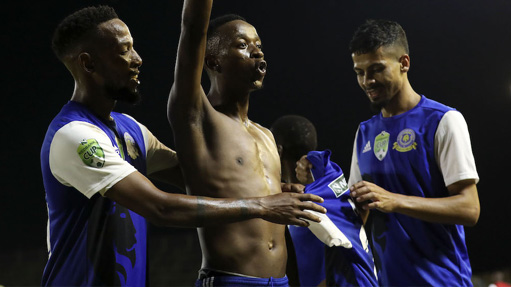 Second-tier Tshakhuma Tsha Madzivhandila staged one of the great comebacks in Nedbank Cup history when they rallied from two goals down to defeat five-time Nedbank Cup winners SuperSport United 3-2 after extra-time of their quarterfinal at the Thohoyandou Stadium on Friday.
SuperSport were cruising as they took a 2-0 lead thanks to goals from Jesse Donn and Ghampani Lungu (penalty), but as has been their Achilles heel of late, they failed to hold on to that advantage.
Tumi Ngwepe brought the hosts back into it with a stunning strike, before Naeem Amoojee took the game to extra-time. And Tumelo Makha scored the winning goal for the GladAfrica Championship side to book a most unlikely semifinal place.
It was the first time that fans have been allowed into a domestic football game since March 2020, a wait of 754 days for supporters finally ended, and there was a decent turnout in Thohoyandou. They did not go home disappointed.
SuperSport United were without six of their leading attacking players with Thamsanqa Gabuza and Iqraam Rayners suspended for the game.
Added to those absences, Bradley Grobler, Kudakwashi Mahachi and Giuly Manziba were all injured, while attacking midfielder Sipho Mbule is not available for selection at present.
Lungu played as a lone striking option, moving from the wing to a more central position, with veteran Aubrey Ngoma played as a number 10 behind him.
TTM coach Lucky Nelukau wore full army fatigues, perhaps braced for a battle, but also in honour of his brother who recently passed away.
But it was SuperSport who got the opening goal and it came from an unlikely source in Donn, though to be fair it was his third goal of the season. He had never scored before this campaign, but was one of Ubuntu Cape Town’s stars in their surprise run to the quarterfinals in 2018.
The goal was set up by Ngoma, who found himself on the right-hand side and crossed the ball with his led favoured foot. It fell to Donn on the edge of the box and he rifled his shot into the corner of the net.
Lungu made it 2-0 from the penalty-spot on 63 minutes with a cool penalty into the corner after TTM defender Nicholas Motloung could not handle the skill of Ngoma and brought down the winger in the box. There were no complaints from the home side.
Kegan Johannes struck the crossbar with a thunderous shot from a tight angle as he almost made it 3-0, but it was the home side who struck next with a superb goal.
The second ball fell to Ngwepe from a headed clearance and he rifled a volley into the top corner from 25-yards with a magnificent strike. SuperSport goalkeeper Ronwen Williams could only watch and admire.
SuperSport have had a real problem holding onto leads this season and so it proved again as TTM found the equalizer with five minutes remaining.
Rhulani Manzini slipped a lovely pass into the path of an onrushing Amoojee, and he side-footed past Williams into the net for his second of the Nedbank Cup campaign.
That sent the tie to extra-time, and it was the home side who continued to create the better chances.
They were rewarded with the goal that made the comeback complete – Makha timed his run into the box perfectly and his first time shot had the beating of a static Williams.