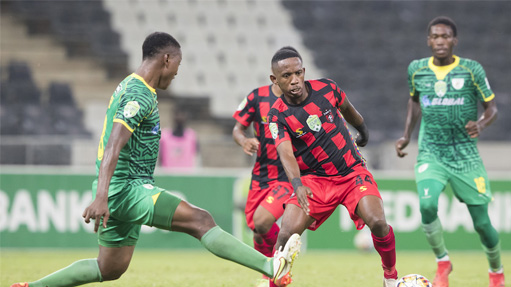 Baroka FC sealed their place in the Nedbank Cup quarterfinals after a 5-3 penalty shoot-out victory over 2019 winners TS Galaxy at the Mbombela Stadium on Sunday.

The teams played to a 1-1 draw before Richard Mbulu scored the decisive kick in the shoot-out after Sihle Nduli had blazed his effort over the crossbar for the home side.

It is the fifth time in eight attempts that Baroka have made the quarters, but better than that have the distinction of winning a semifinal place as a third-tier (2011), second-tier (2016) and top-tier (2020) club, without ever progressing to the final.

The two sides met in the league last weekend and it was Baroka who came out on top in that encounter with a 1-0 win.

And they took the lead again in this encounter after being awarded a penalty just past the half-hour mark that was converted by Sekela Sithole.

Galaxy took the game to them after that and equalised after a piece of good fortune as Sipho Maluleke scored a remarkable own goal on his Baroka debut.

The cross was swung in and he got his head to the ball, but succeeded only in beating his own goalkeeper with a 15-yard effort that arrowed into the net.

The match went to extra-time, during which both teams wilted as their energy levels  dropped. Penalties became inevitable.

Meanwhile, Summerfield Dynamos became the first third-tier team into the quarterfinals since Baroka FC in 2011 as they edged fellow ABC Motsepe League side Black Eagles 1-0 at the Chatsworth Stadium.

They had goalkeeper Bongani Masoga to thanks for getting them to extra-time after he saved a penalty from Olwethu Ncube in the third minute of injury-time at the end of the game.

Masoga got down low to his right to claw the ball away in what was a tight 90 minutes with few chances at either end.

But the breakthrough came just two minutes into extra-time as the unfortunate former TS Galaxy defender Tumelo Bodibe turned the ball into his own net, nutmegging his goalkeeper in the process.

The win is an excellent one for coach Clinton Larsen, who is no stranger to the big-time in South African football and will be eager to see who his side gets in the next round.

After extra-time; Baroka won 5-3 on penalties