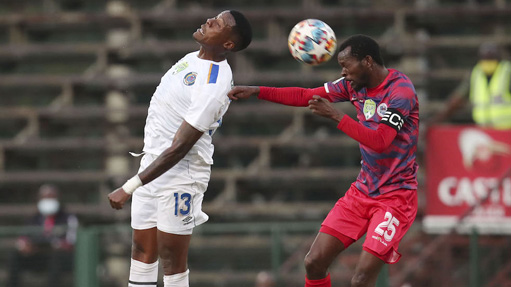 Selaelo Rasebotja scored his first ever goal in professional football inside the first minute of the game as SuperSport United edged second-tier Platinum City Rovers 1-0 in their Nedbank Cup Last 16 clash at Olen Park on Saturday.

The 20-year-old Rasebotja basted the ball into the back of the net after good work from Iqraam Rayners had set him up for the finish, as Matsatsantsa made the perfect start.

They did make heavy weather of it after that though, as Thamsanqa Gabuza missed a penalty in the first half that could have extended their advantage and made for a less nervy finish.

He struck the spot-kick to the right of goal but City Rovers goalkeeper Thabiso Mabitsela, making just his sixth ever appearance in professional football, got down to make the save.

SuperSport dominated the game after that in terms of possession, though chances for either side were few and far between.

They hung on for the win and book a quarterfinal place for the first time since they lifted the trophy in 2017.

They also keep up their record of never having lost to lower league opposition in their history.

GladAfrica Championship side TTM breezed past Eastern Cape ABC Motsepe League team Sinenkani FC 3-0 in the earlier game on Saturday that was played at Mthatha Stadium.

It did take 42 minutes for the visitors to break the deadlock, but the goal came at some cost.

Rendani Ndou headed in Tumi Ngwepe’s cross, but in doing so also caught the head of a defender and his injury was so severe that he was rushed to hospital for further treatment.

The visitors made it 2-0 on 70 minutes when veteran former AmaZulu and Chippa United forward Rhulani Manzini doubled the advantage after being set up by Tlou Masegela.

That killed the game as a contest with Sinenkani never looking as though they could get back into it, and the third for the visitors arrived in the third minute of injury-time when Naeem Amoojee got his first goal since November, again set up by Masegela.