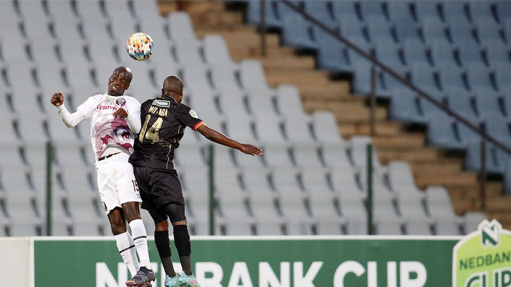 PIC: Musa Nyatama of Swallows FC challenged by Thabo Matlaba of Royal AM

Kabelo Mahlasela scored his first goal since September as Royal AM advanced to the quarterfinals of the Nedbank Cup with a 1-0 win over Swallows FC at the Dobsonville Stadium on Friday.

In a game of few chances, Mahlasela provided the decisive moment as he played an excellent one-two with Mxolisi Macuphu on the edge of the box before firing past Jody February in the home goal.

It was an excellent piece of play to win the game and earns Royal AM a second visit to the quarterfinals after they reached that stage in 2020 but lost 4-0 to BidVest Wits.

After a cagey first 55 minutes in which there were few chances, Swallows were awarded a penalty when Royal AM midfielder Jabulani Ncobeni blocked a cross with his arm.

Veteran playmaker Lebohang Mokoena took on the responsibility of the spot-kick but his effort was weak and too close to goalkeeper Hugo Nyame, who made a comfortable save.

Swallows had a few half-chances after that but poor decision-making in the final third cost them again, as it has for much of the season.

Friday’s first Last 16 match had just about everything you could imagine – six goals, two of which were penalties, extra-time and then a shoot-0out to decide the winners.

The 2009 Nedbank Cup finalists University of Pretoria eventually triumphed 4-3 on spot-kicks after the teams had played to a 3-3 draw, with AmaTuks taking the lead in the game and then forced to fight back, only lead again and have to settle for a draw.

Thabang Sibanyoni opened the scoring for them after 12 minutes, but goals from Banele Gama and Rankoko Tau turned the tie in the favour of the home side in their ‘slaughterhouse’ of the Thohoyandou Stadium.

AmaTuks responded with a penalty through Keegan Allan to level the tie again and send the game to extra-time.

The visitors then took the lead through Wonderboy Makhubu with his first goal in over two years, since he netted for TTM against Cape United in February 2020.

But Venda were not done yet and when they received a penalty for a handball in the box, Zimbabwe international Gerald Takwara stepped up to convert the spot-kick and make the score 3-3.

That meant a penalty shoot-out and it was AmaTuks who held their nerve as goalkeeper Thakasani Mbanjwa saved from Sedzani Mudau and Tau missed to send the Tshwane side into the quarterfinals for the first time since 2010.