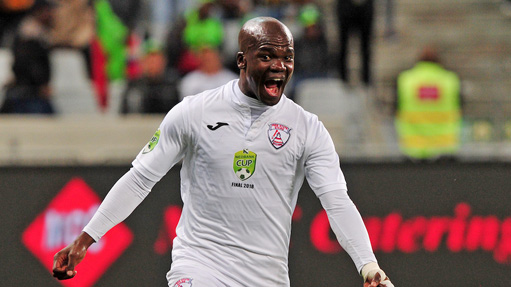 Scoring a cup final winning goal or making the crucial save to keep your team in the contest is one of the biggest moments for any player in their career – and likely the one they remember the most.

Each year the Nedbank Cup has delivered such a hero, the player who has proven influential at the right moment to secure success in the country’s biggest and most prestigious knockout tournament.

Here is a look at the cup final heroes of the previous 14 years of the Nedbank Cup.

Lerato Chabangu (Mamelodi Sundowns): It was a frustrating afternoon for heavily fancied Sundowns at the Johannesburg Stadium against second division Mpumalanga Black Aces, who despite their lowly status actually held the upper hand for much of the game. But two minutes from time Chabangu latched onto a clearance by Aces’ defender Thabang Rooi and banged a screamer past Michel Babale in the Aces goal to win the game 1-0.

Vinicius da Silva (Moroka Swallows): It was a Brazilian double act that ensured the cup went to Swallows as they beat second tier University of Pretoria 1-0 in the final, as the refurbished Rand Stadium in Johannesburg celebrated its re-opening. Igor Alves swung in a 21st minute free kick, that AmaTuks ‘keeper Siya Mngoma came out for but failed to collect, and Da Silva powered home a header that would prove enough to win the game for the Birds.

Sifiso Vilakazi (Bidvest Wits): A jam-packed Soccer City, opened for the first time after a pre-2010 World Cup refurbishment, saw Wits overcome AmaZulu 3-0 in the final. The elegant Brazilian midfielder Fabricio Rodrigues scored the opener but the result was made sure by a dramatic double near the end from Vilakazi. First he smashed home a powerful left footed drive and then within a minute grabbed a second goal, at the end of a pass from Sifiso Myeni that cut in the two the Usuthu defence.

Thulasizwe Mbuyane (Orlando Pirates): Mbuyane ensured Pirates completed the league and cup double as they beat lower tier opposition. But the Buccaneers had to come from behind against Black Leopards and it was Mbuyane who set up the equaliser for teammate Isaac Chansa. He then added two of his own – the first three minutes after the 72nd minute equaliser and then again right before the end of the game to complete a 3-1 victory.

Kermit Erasmus (SuperSport United): Erasmus was pivotal in the two major incidents of the final as SuperSport United beat neighbours Mamelodi Sundowns 2-0 at the Orlando Stadium. First, it was the clumsy tackle on him that saw Sundowns defender Clayton Daniels sent off after only 17 minutes, handing his side a severe handicap. Then, after Eric September opened the scoring, Erasmus made sure of victory on the hour mark as he buried the rebound after his first effort was saved by Wayne Sandilands.

Bernard Parker (Kaizer Chiefs): Parker had had the best effort of a goalless 90 minutes against SuperSport United at the Moses Mabhida Stadium, so it was only fitting he would go on and score the winner in extra time. Ronwen Williams made a spectacular save to turn Parker’s 65th minute effort around for a corner but four minutes into extra time, he drove a low left-footed shot after being queued up by Simphiwe Tshabalala to ensure Chiefs won 1-0 to complete the league and cup double.

Kermit Erasmus (Orlando Pirates): The diminutive Erasmus netted twice as Pirates came from behind to win the final at the Moses Mabhida Stadium in Durban. Bidvest Wits were leading 1-0 at half-time but Erasmus equalised early in the second half at the end of a square pass from Oupa Manyisa. Sifiso Myeni then made it 2-1 before Erasmus put the result beyond doubt by slamming a loose ball into the bottom left-hand corner for a 3-1 scoreline.

Bongani Zungu (Mamelodi Sundowns): For the first time since 2006, the cup final ended goalless and the game at the Nelson Mandela Bay Stadium in Gqeberha had to go into a penalty shootout. Ajax could have won it when Abbubaker Mobara needed only convert their last kick but he missed and when Franklin Cale then squandered Ajax’s next penalty, it was left to Zungu to grab the opportunity and hand Sundowns success.

Michael Boxall (SuperSport United): The New Zealand international fullback was not employed for his goalscoring ability but more than repaid the club’s investment in him with the winner in the 3-2 triumph over Orlando Pirates. SuperSport had to come from behind to equalise in the first-ever final in Polokwane when Boxall provided the cross for Jeremy Brockie to head home from close range. Then Bradley Grobler made it 2-1 before Boxall made sure with the third goal in the first half to all but sew up the title.

Bradley Grobler (SuperSport United): Grobler had scored one year earlier when SuperSport beat Pirates 3-2 at Polokwane and he got two more in a 4-1 rout in Durban as the two sides met in the final for a second successive year. It was a one-sided game with Grobler opening the scoring in the 33rd minute and getting the third just past the hour mark. The other two goals were scored by Jeremy Brockie, who squandered a penalty, and Kingston Nkhatha.

Goodman Dlamini (Free State Stars): Stars won a first-ever Nedbank Cup with Dlamini scoring the only goal of the game at the Cape Town Stadium to ensure victory over Maritzburg United. The goal was a classic counter attack move with goalkeeper Thela Ngobeni kicking up field to Sinathemba Jantjie, who saw Dlamini storming down and into space and set him up to finish just a minute before half-time. It proved enough for Stars to claim a rare piece of silverware.

Zakhele Lepasa (TS Galaxy): One of the most sensational results in the history of the game in South Africa as TS Galaxy became the first second tier side to win any cup, while at the same time extending Kaizer Chiefs’ long trophy drought.  Substitute Lepasa was hacked down by Chiefs defender Teenage Hadebe in the 89th minute and got up off the turf to take the resultant spot kick himself, showing nerves of steel after a three minute wait to bury the ball into the back of the net.

Gaston Sirino (Mamelodi Sundowns): Sundowns were struggling to break down a resolute Bloemfontein Celtic side in the decider at an empty Orlando Stadium, but cometh the hour, cometh the man and their Uruguayan magician conjured the deciding moment to see them claim a domestic ‘Treble’. It was a fine winning goal too as he picked up the ball from deep, drove at the retreating Celtic defenders and then fired a low shot from 25-yards into the corner of the net. An excellent individual moment of brilliance!

Ndabayithethwa Ndlondlo (TTM): It was always likely to be a tight final between TTM and Chippa United when they clashed in the 2021 decider at the Free State Stadium, and not surprisingly it took a moment of excellence to win the game. TTM’s Ndlondlo tried his luck from a full 35-yards and the shot took a slight deflection, which saw it arrow into the back of the net. It was an ambitious effort, but he was rewarded for his confidence!