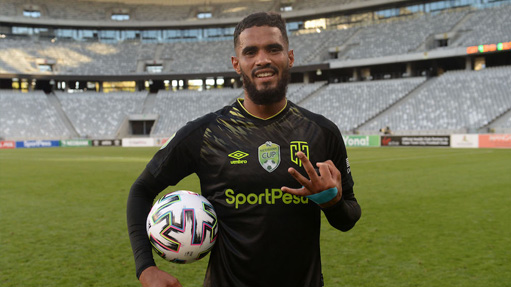 PIC: Tashreeq Morris of Cape Town City with the match ball after scoring a hattrick against Celtic in 2021

Tashreeq Morris’ hattrick for Cape Town City against Bloemfontein Celtic in the Last 32 of the Nedbank Cup in 2021 was the first time a player had scored a ‘treble’ in the competition for five years!

The City forward banged in three goals in his side’s 4-0 win over Celtic for what has been the rarest of feats in recent years in the Nedbank Cup.

It was the 16th time a player had scored a hattrick in the competition, but many of those were in the year years, with Morris’ feat the only one since 2016.

There were two scored in that season as Bongi Jayiya netted for Mpumalanga Black Aces against lower league United Rovers, and Daine Klate scored four goals as BidVest Wits brushed aside Magesi FC 6-0.

Of course, the most famous hattricks came as Mamelodi Sundowns defeated Powerlines FC 24-0 in 2012, and in doing so saw Hlompho Kekana (seven goals) and Nyasha Mushekwi (six) both score ‘double hattricks’ in an incredible fixture. The late Richard Henyekane also got in on the act with five goals.

Kekana’s haul remains the most goals ever scored in a single Nedbank Cup match by a player, while his career total of 11 makes him the leading scorer in the competition since 2008.

Dumisani Ngwenya (five) was also among the goals as AmaZulu thumped Young Ones 14-0 in 2008, while Ayanda Dlamini scored three against Real Madrid in 2011. Not the Real Madrid, obviously!

The only hat-trick of Musa Nyatama’s career came when he netted three against University of Stellenbosch in 2014.

Of course, the franchise of Black Aces would be sold to form Cape Town City ahead of the 2016/17 season, but they remain two separate clubs.

There is every possibility that we will still see a hat-trick in this year’s Nedbank Cup given the array of attacking talent on display.

Perhaps there will be one on the opening fixture of the Last 16 when Sundowns play host to third-tier side Mathaithai next Tuesday, though the Botshabelo-based side will be up for the fight.