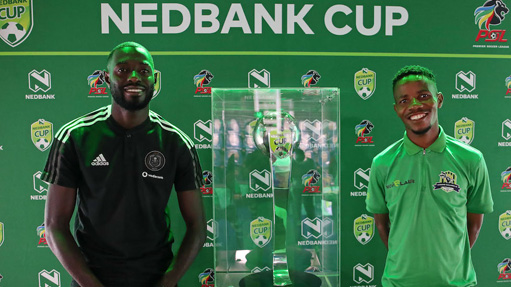 The draw for the Last 16 of the Nedbank Cup has provided some intriguing ties, with the chance of potentially one of the greatest upsets in South African football history.

We are also sure of at least one ABC Motsepe League side in the quarterfinals, while there are a few big clashes between DStv Premiership teams.

An all-GladAfrica Championship clash between 2009 finalists AmaTuks and a newly formed side just this season in Venda Football Academy.

Both will probably look at it as a great chance to advance, though the Limpopo side will relish homeground advantage, which has been so important to them this season.

Both also have two old war horses in their ranks – Venda’s coach is Johnny Ferreira, who won this competition with Witbank Black Aces all the way back in 1993.

But AmaTuks have Sammy Troughton as their technical director, another veteran of the domestic scene who has seen it all and will provide experienced input for head coach Tlisane Motaung.

AmaTuks saw off top-flight Chippa United with a 2-0 home win in the Last 32, while Venda defeated ABC Motsepe League outfit African All Stars, but only after extra-time.

These two sides played to a 1-1 draw when they met earlier in the season in Limpopo.

Swallows have last year’s Nedbank Cup winning coach now in their camp in the form of Dylan Kerr and while league survival is very important, he is also well aware that a good run in the keep breeds confidence among players, as was the case with TTM (now Marumo Gallants) last season.

Kerr also made the semifinals of the competition in 2020 while with Baroka FC, but lost 3-0 in the first game back in the Gauteng bio-bubble after the long break to the season due to COVID-19. So he has good pedigree in the competition.

Royal AM are riding a wave this season and while they are certainly more potent at home than away, are starting to play with a certain swagger under coach Maduka.

Maduka, ironically, was in charge of Celtic in that semifinal against Kerr’s Baroka.

Swallows claimed a late, injury-time league win these sides met in August, while their previous clashes in the second-tier resulted in a win and a draw for The Birds.

The current holders take on a Orlando Pirates side that has not tasted victory in this competition since 2014, but will know this is a very realistic chance of silverware this season.

Gallants can blow hot and cold but have a wily coach in former Pirates defender Dan Malesela, who will certainly relish the opportunity for a major scalp.

He has got the side playing some good football and while Pirates will certainly be the favourites on paper, this is not an easy tie to predict, especially as it is being played in Limpopo.

Such were the vagaries of the fixture list that these sides met four times in the 2021 calendar year. Pirates claimed two victories, but there were also two 0-0 draws – one in Polokwane and the other in Orlando.

Platinum City Rovers saw off Sekhukhune United on penalties in the Last 32 and now host top-flight opposition for the second successive round.

It is another chance for them to showcase their potential DStv Premiership credentials as they look to push for promotion this season, their first in the GladAfrica Championship.

This tie will perhaps have extra meaning for their veteran midfielder Oupa Manyisa, who was in the Orlando Pirates side that lost consecutive Nedbank Cup finals to SuperSport United in 2016 and 2017. He scored in the latter of those two.

This is the first time since that last final that SuperSport have made it beyond the Last 32 of the competition, so they will be equally desperate to make it count in a game they will be expected to win.

Galaxy defeated Kaizer Chiefs in the last round, claiming a deserved 1-0 victory, and will hope that is a turning point in what has been a difficult season to date.

The home draw is important to them, that win over Chiefs was their first away success this campaign as they have proven poor travellers.

The Rockets do, of course, have wonderful memories in the Nedbank Cup, wining the competition in 2019 while still campaigning in the second tier.

But the same goes for Baroka, who are three-time semifinalists – once as a third-tier side, once when they campaigned in the second-tier and then as a top-fight side.

But they are yet to reach the final and that will certainly be a solid ambition for this campaign.

The teams have met on three previous occasions and Galaxy have held sway, with two wins and a draw. That includes a 2-1 home success in November.

Sinenkani will face second-tier opposition for the second round in a row having seen off Free State Stars in the Last 32.

And they might well fancy their chances of advancing even further against a TTM that outlasted Lamontville Golden Arrows in the last round, but will not fancy a trip to the Walter Sisulu University Stadium knowing that the home side will be up for the fight.

Sinenkani coach Vumane Mvundla is has been given high praise by his former coach at Golden Arrows, Manqoba Mngqithi, who believes he is one of the brightest young tacticians in the country.

This clash ensures there will be at least one third-tier side in the quarterfinals as Clinton Larsen’s Chatsworth-based Dynamos host Black Eagles from the North West province.

Dynamos ousted second-tier Uthongathi in the last round, while Black Eagles saw off fellow ABC Motsepe League side FC Sivutsa.

Judging on those performances you would think Larsen’s team has the smarts to see off the visitors, but this will be a huge test for two teams with big ambitions to be in the GladAfrica Championship soon.

A dream tie for the Free State ABC Motsepe League side against the current giants of South African football, though they will hope there is no repeat of the 24-0 hiding Sundowns handed out to third tier opposition in the form of Powerlines FC in 2012.

That is highly unlikely though and while there will surely be no upset result, Mathaithai, who style themselves as the pride of Botshabelo, will be confident of giving The Brazilians a game.