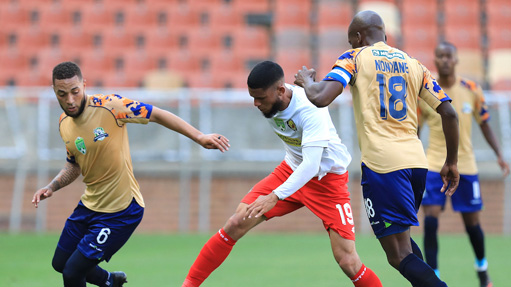 Ivorian forward Sede Dion scored twice as holders Marumo Gallants eased into the Last 32 of the Nedbank Cup with a 2-0 victory over third-tier Santos at the Peter Mokaba Stadium on Sunday.

Dion provided two neat finishes from close range with typical poacher’s goals as he took his tally for the season to four.

Gallants never looked troubled by the Western Cape ABC Motsepe League side in sweltering conditions and coach Dan Malesela, who led TS Galaxy to the Nedbank Cup title in 2019, will be pleased with the professional performance.

Dion’s first came as he was picked out in the box by Mpho Mvalese on 19 minutes, and it was 2-0 midway through the second half when he finished from inside the six-yard box after connecting with Katlego Otladisa’s clever cross.

Santos, who won the Nedbank Cup competition in 2001 and 2003, have fallen on hard times of late, but did have a number of recognizable names in their side, though most were on the bench.

The son of owner Goolam Allie, Suhayl, was one of those, along with former Witbank Spurs and Cape Town All Stars midfielder Slovo Mrawu. They failed to threaten their hosts though and barely had a sniff at goal.

There was also an all-third tier clash on Sunday as Black Eagles of the North West ABC Motsepe League defeated Mpumalanga counterparts FC Sivutsa 3-2 in a five-goal thriller that went to extra-time.

The draw for the Last 16 of the Nedbank Cup will be held on Monday at 18h00 and will be broadcast live on SuperSport channel 202.

There will be eight sides from the DStv Premiership, with exactly half surviving the Last 32, as well as four each from the GladAfrica Championship and ABC Motsepe League.

That is the joint most third-tier sides ever to reach this stage of the competition, making the four that made it in 2020.

There has been at least one amateur side in the second round every year bar 2021, when teams from the SAFA structures did not take part in the competition due to the disruption to domestic sport by the COVID-19 pandemic.