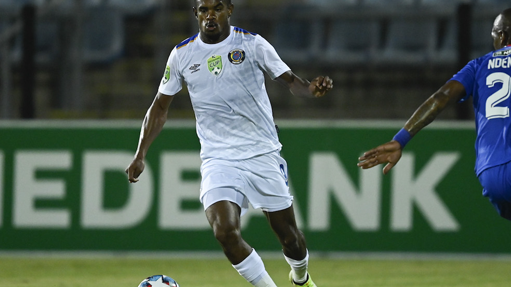 Rayners stunner wins it for SuperSport

Iqraam Rayners scored a winner two minutes from time as SuperSport United reached the Last 16 of the Nedbank Cup for the first time since 2017 with a 1-0 victory over Maritzburg United at the Harry Gwala Stadium on Wednesday.

In a game of few chances, it was Matsatsantsa who came out on top and it was a beautiful goal to win it.

He raced down the left flank and cut inside before unleashing a curling effort into the far corner. He has now scored three goals for SuperSport since joining at the start of last season, but all have come in knockout competitions.

Maritzburg did not create enough to get anything from the game, but it is a result that will pile more pressure on coach Ernst Middendorp as his side exit at the first hurdle having been finalists in 2018.

Rayners earlier had a header that flashed narrowly wide of the goal, before he was denied by a fine stop from Maritzburg goalkeeper Marcel Engelhardt.

Ghampani Lungu tried a cheeky backheel effort that was again saved by the German keeper, while at the other end Ronwen Williams was called into action to deny Daylon Claasen.

Friday Samu had the best chance of the match for the hosts when his persistence saw him beat two defenders and go one-on-one with Williams, but the Bafana Bafana number one saved with his feet.

In the other game on the day, GladAfrica Championship side Venda Football Academy, whose coach Johnny Ferreira lifted the Nedbank Cup competition with Witbank Black Aces in 1993, needed extra-time to see off Gauteng ABC Motsepe League side African All Stars.

The third-tier side actually took the lead when Delemo Lekhanya converted a penalty midway through the first half.

But on-loan Simiso Bophela from Orlando Pirates equalised for the home side to take the game to extra-time, where they profited from an own goal and then a third via Rotonswa Mutsivhuli.

Venda, who were only formed at the start of this season, when the owners purchased the status of Cape United, were making their debut in the competition.

All Stars are the only third-tier side ever to play in three Nedbank Cup seasons, but like their previous appearances in 2016 and 2017, go out in the Last 32 to Limpopo opposition.