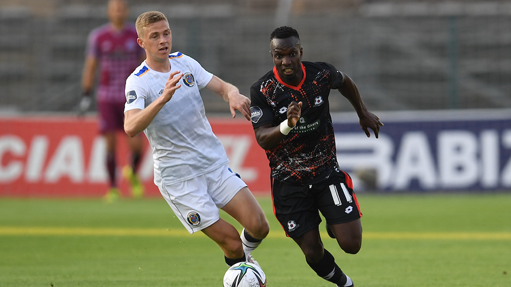 SuperSport United coach Kaitano Tembo believes the Nedbank Cup gives his side a realistic chance of silverware this season but admits they face a mighty challenge in their Last 32 clash away at Maritzburg United on Wednesday.

Matsatsantsa won the Nedbank Cup in 2012, 2016 and 2017, but have exited in the first round on each occasion since that last triumph, and Tembo knows the difficulty they face this time round too.

“It is going to be a very tough game against a very good team. We are away from home and you know how it is at the Harry Gwala Stadium, it is always a difficult place to go,” Tembo says.

“But for us, this cup is a very important. This season it gives us a realistic opportunity to finish off with silverware. I want us to have a real go in it.”

SuperSport will play for the first time since December and Tembo says it is hard to assess where the squad is without competitive games under their belt.

“Preparations have been going well, but the most important thing is that competitive and friendly games are not the same. So at the moment we don’t have a realistic idea of where the team is. We can only know when we play competitively.”

Maritzburg coach Ernst Middendorp has the same feelings but with his side at the wrong end of the DStv Premiership table, is perhaps under a little more pressure than Tembo. Still he could see the funny side of it.

“It is another game where I am under pressure. I heard that I have to win the first three games [of 2022] or I will get fired,” he said with a smile, adding that the mini-squad overhaul in the January transfer window brings further uncertainty.

“Last year it was Orlando Pirates in the [Last 32], this year it is SuperSport United. Right now I am not 100% sure of what changes we will make to the team.

“Some players left for the MLS [Bongokuhle Hlongwane], others have come in. Last year we played Pirates with many players from our Diski team, we were leading 1-0 at halftime and probably should have been two or three up.

“But then we collapsed in the second half completely and lost the game. So I am not sure about which players we will use, because we must also concentrate on the first three games in the league.

“Under normal circumstances, when you are a coach and you have a certain knowledge, you know if it will fit, is it a good combination [of players]. But this you can only find out in the competitive matches.”

The second fixture on Wednesday will see GladAfrica Championship side Venda Football Academy take on African All Stars from the Gauteng ABC Motsepe League.

The Limpopo club are led by veteran coach Johnny Ferreira, who took Witbank Black Aces to the title in 1993. His new side were only formed at the start of the season when they purchased the status of Cape United.

“It is great to make our debut in a very prestigious tournament like the Nedbank Cup,” Ferreira says. “If you are a superior team based on your log position or whatever division you are playing in, and you think you are better than the teams from the lower divisions, you will lick your wounds after the game.

“Therefore it is extremely important for a team like Venda Football Academy. We take things very seriously, whether it is practice matches, NFD games or the Nedbank Cup.

“The match against African All Stars will be no different, I know ‘Sthakhathi’ [All Stars coach Themba Masango] from my brief spell at Sekhukhune United last year, he is a great student of the game.

“We will invite them to the graveyard, which is Thohoyandou Stadium, because there we bury people alive! But jokes aside, we are looking for a victory and will make it as tough as possible for All Stars.”

Masango says he will put his friendship with Ferreira aside for 90 minutes and believes All Stars have a big chance for an upset win.

It is their third appearance in the Nedbank Cup after they also featured in 2016 and 2017, and in a quirk of fate, were drawn away at Polokwane City in both years, matches they lost 2-1 and 3-1.

“I don’t know what the relationship between African All Stars and Limpopo teams is!” Masango joked. “But we are the only team from the ABC Motsepe League that has participated in the Nedbank Cup on more than two occasions.

“Johnny Ferreira is my friend, I have learnt a lot from him in football, but he must also know that when we go there to Venda, it won’t be difficult for us to beat them.

“You can see on the log they are doing well, but for our boys, we are determined to go there and compete. They will also want to use the platform to showcase their talent, so maybe Johnny will want to sign one or two. They will be motivated.”