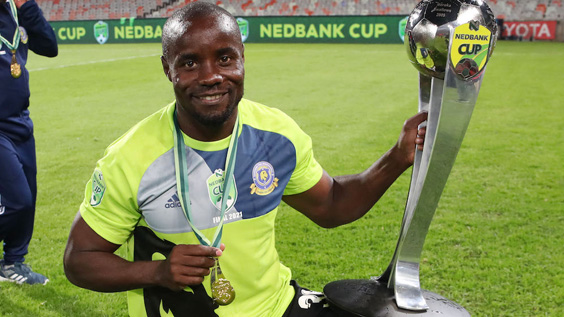 There were many outstanding performances in the 2021 Nedbank Cup, which culminated in TTM lifting the trophy after they defeated Chippa United 1-0 in the final at the Free State Stadium on Saturday.We pick 10 players who shone for their sides in the competition this year, some of whom have used the Nedbank Cup to renew their reputation and find their form again.

WASHINGTON ARUBI (TTM)
Goalkeeper Arubi played every minute of TTM’s campaign, keeping four clean sheets in five games, and winning a penalty shoot-out against Mamelodi Sundowns in the semifinals. That was one of the stand-out performances of the season in any competition as he kept The Brazilians at bay with stunning saves and then held his nerve when it was time for the spot-kicks. The only other player to feature in every minute for TTM was veteran defender Alfred Ndengane
RIVALDO COETZEE (MAMELODI SUNDOWNS)
The flashy attacking players tend to get the plaudits at Sundowns, but the work of Coetzee in the midfield cannot be discounted. Converted from centre-back to defensive midfielder, he controls everything in the middle of the park for The Brazilians and the way he picked apart Orlando Pirates in the 4-1 quarterfinal win could be a case study for excellence in that position.
RIAAN HANAMUB (CHIPPA UNITED)
Namibia international Hanamub was a model of consistency for Chippa through the tournament, playing every minute of their campaign and throwing in a goal to boot against Free State Stars in the Last 32. The full-back is known much more for his defending though and it was his stout displays at the back, and energetic runs forward down the flank, that helped the Chilli Boyz reach the final.
POGISO MAHLANGU (PRETORIA CALLIES)
TMahlangu is used very much as an impact player by Callies off the bench and he showed that in the Nedbank Cup. He netted twice in the preliminary round against Steenberg United, and continued that form once in the competition proper. He scored again to see off high-flying Royal AM in the Last 32, and then netted against Cape Town All Stars as Callies won the quarterfinal via a penalty shoot-out.
THABO MNYAMANE (TTM)
Mnyamane had seen his career on the slide but it has been resurrected by the Nedbank Cup, where his crucial goals against former side SuperSport United and Swallows FC went a long way to TTM lifting the trophy. He has never been prolific in front of goal and is often used in wide positions, but Mnyamane has undoubted quality and certainly earned his winners’ medal.
TASHREEQ MORRIS (CAPE TOWN CITY)
The only player to net a hat-trick in this season’s Nedbank Cup was City star Morris, who found the back of the net three times in the second half of the Mother City club’s 4-0 demolition of 2020 finalists Bloemfontein Celtic in the Last 32. He has rediscovered his touch in front of goal after some lean years and the Nedbank Cup has played a major role in that turnaround.
SANDILE MTHETHWA (CHIPPA UNITED)
The blossoming of Mthethwa into a top-class centre-back in the Premier Soccer League this season has been exciting to watch and he played a massive role in Chippa’s run to the final. That included netting the vital goal in the semifinal win over Pretoria Callies, with his strength and work-rate catching the eye. Chippa only conceded three goals in the tournament when he was in the heart of their defence.
JUPITER NGWENYA (PRETORIA CALLIES)
Ngwenya is in only this third season as a professional, but is making quite a name for himself at Callies and was a key part of their run to the Nedbank Cup semifinals this season. The centre-back had previous experience in the second-tier with Black Leopards and TS Sporting, but has perhaps shown his best form with Callies in the Nedbank Cup, though he has been used sparingly in the league campaign. He is a player to keep an eye on.
PETER SHALULILE (MAMELODI SUNDOWNS)
The competition top-scorer has a love-affair with the Nedbank Cup after he followed his three goals last season in the colours of Highlands Park with four more for Sundowns. He therefore has seven goals in seven starts and there is no player to match that record over the same period. He scored a brace against Stellenbosch FC in the Last 32 and followed that up with further strikes against Polokwane City and Orlando Pirates.
MIGUEL TIMM (TTM)
Much of the work that Timm does in the centre of midfield goes unnoticed, but there are few better exponents of the art than him in the Premier Soccer League. His job is to break up the opponents play and disrupt their possession, before quickly getting his side onto the front foot with the right pass, and he does that expertly. TTM did not concede a single goal when he was on the pitch.
Share on