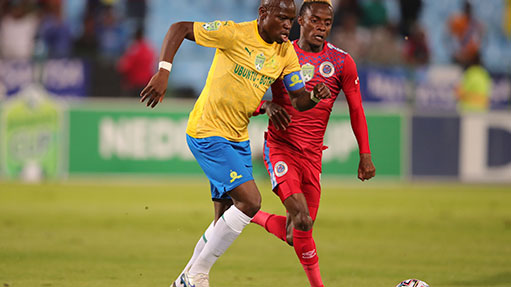 The 2022 Nedbank Cup in Numbers

The Nedbank Cup returns for a 15th edition in 2022 and remains the only competition in South Africa football that allows amateur players to live their dreams and test themselves against the country’s best.

We round up the numbers from what is the most prestigious knockout competition in the country.

0 – As things stand, no fans will be able to attend Nedbank Cup matches at the start of the competition, at least, due to the COVID-19 pandemic.

0 – The Tshwane duo of Mamelodi Sundowns and SuperSport United have never lost to opposition from outside the Premiership since the Nedbank Cup was first played in 2008. They have played a combined 83 matches in the competition and only ever been ousted by top-tier clubs. By contrast, Soweto giants Kaizer Chiefs have lost to lower league clubs on six occasions in that time.

1 – There will be seven debutants in the Nedbank Cup this year, including a team that bears the same name as last year’s winners! Mathaithai, Black Eagles, FC Sivutsa, Sinenkani FC, Venda Football Academy, Summerfield Dynamos and the latest incarnation of Tshakhuma Tsha Madzivhandila will be appearing for the first time. This is not the TTM that lifted the Nedbank Cup in 2021. By the time that club, now known as Marumo Gallants, defeated Chippa United in the final, TTM owner Lawrence Mulaudzi had already sold up to the new owners. But because the sale was made mid-season, the new owners had to keep using the name until the end of the campaign.

1 – The 2021 Nedbank Cup title was the first trophy win for then TTM coach Dylan Kerr in South African football. He became the 11th different tactician to lift the trophy since 2008. He is now in charge of Swallows FC.

1 – TTM (now Marumo Gallants) were the first ever club from the Limpopo province to lift the Nedbank Cup trophy! Black Leopards came close in 2011 when they made the final but lost 3-1 to Orlando Pirates.

2 – The number of former Nedbank Ke Yona Team graduates who have lifted the Nedbank Cup trophy. Aubrey Modiba first achieved the feat with SuperSport United in 2017, while the late Thembinkosi Mbamba helped TS Galaxy to the title in 2019. Mbamba died in a car accident on May 25, 2019, just a week after playing in the decider.

3 – Kaizer Chiefs coach Stuart Baxter has won the Nedbank Cup on more occasions since 2008 than any other tactician. His three titles came with Chiefs in 2013, and then back-to-back successes with SuperSport United in 2016 and 2017. Overall, former Mamelodi Sundowns coach Pitso Mosimane also has three titles after wins in 2005 (with SuperSport), and 2015 and 2020 with The Brazilians. He is now coaching Al Ahly of Egypt.

3 – Baroka FC are the only third-tier side to reach the Nedbank Cup semi-finals after they achieved that feat in 2011, beating Moroka Swallows and Kaizer Chiefs on their way to the Last 4. They were eventually edged on penalties by second-tier Black Leopards.

4 – Last year’s 1-0 win for TTM over Chippa United was the fourth year in a row that just a single goal was needed to decide the final as Free State Stars (2018), TS Galaxy (2019) and Mamelodi Sundowns (2020) also recorded 1-0 wins over Maritzburg United, Kaizer Chiefs and Bloemfontein Celtic respectively.

4 – Vaal University of Technology became the first ever side from South African football’s fourth tier to oust Premiership opposition from the Nedbank Cup when they defeated Lamontville Golden Arrows on penalties following a 2-2 draw in their Last 32 clash in 2020. They lost 2-0 to Mamelodi Sundowns in the next round.

4 – Mamelodi Sundowns forward Peter Shalulile was the top-scorer in the 2021 Nedbank Cup with four goals. He had also finished joint top-scorer in 2020 with three, though those came in the colours of Highlands Park. No-one has come close to matching his seven goals in the last two campaigns. And he is firing this season too …

4 – Four teams from outside the Premiership have reached the final of the Nedbank Cup since 2008, with one of those, TS Galaxy, going on to lift the trophy. Mpumalanga Black Aces lost 1-0 to Mamelodi Sundowns in the first year, while in 2009 University of Pretoria went down by the same scoreline to Moroka Swallows. And two years after that, in 2011, Black Leopards were in the decider but lost 3-1 to Orlando Pirates. But TS Galaxy made history by beating Kaizer Chiefs 1-0 in the final in 2019.

5 – The most played game in Nedbank Cup history since 2008 has been Mamelodi Sundowns against Orlando Pirates. They have met on five occasions, with Sundowns leading the head-to-head 3-2, including last year when they won 4-1. Incredibly, four of the five meetings have been in the quarterfinals!

6 – AmaZulu have appeared in six finals of the Nedbank Cup competition dating back to its start in 1971 … and never won! They have tasted only defeat in the decider, the last time in 2010 when they were beaten 3-0 by BidVest Wits. Will it finally be their year in 2022 with Benni McCarthy at the helm?

8 – Cape Town Spurs, who were formerly known as Ajax Cape Town, have been involved in the most penalty shoot-outs in the Nedbank Cup since 2008, with eight. They have won only two of those and lost six! They are not appearing in the first round this after going out in the preliminary round.

8 – Kaizer Chefs have now gone eight years without lifting the Nedbank Cup title, their longest run without success since the competition was first played in 1971. Their previous longest barren run was six years, between 1993 and 1999 (tournament not played in 1997), and 2007 and 2012. They made the final in 2019 but lost 1-0 to second-tier TS Galaxy.

8 – One of Orlando Pirates, SuperSport United or Mamelodi Sundowns have appeared in eight of the last 11 Nedbank Cup finals since 2011. Pirates’ four appearances have included two wins and two defeats, both to SuperSport. Matsatsantsa have won three of their four final appearances in that time, losing out to Kaizer Chiefs in 2013. Sundowns also have three wins to go with a single defeat to SuperSport in 2012. The only years when one of them did not appear was in 2018, 2019 and 2021.

9 – There have been nine different winners of the Nedbank Cup in the 14 seasons played since 2008. Tshwane duo SuperSport United and Mamelodi Sundowns have been the most frequent winners with three titles each, while Orlando Pirates have won twice. Moroka Swallows, BidVest Wits, Kaizer Chiefs, Free State Stars, TS Galaxy and Tshakhuma Tsha Madzivhandila are other victors.

9 – Orlando Pirates hold the record for the most runner-up finishes in the history of the Nedbank Cup competition with nine (to go with eight tournament wins). They are also the only side to lose two finals since Nedbank took over sponsorship in 2008.

11 – The leading scorers in the history of the Nedbank Cup is former Mamelodi Sundowns campaign Hlompho Kekana, who has netted 11 times. It is a total significantly boosted by the seven goals he scored against Powerlines FC in 2012, but he has also netted against Platinum Stars (2015), EC Bees, Cape Town City (both 2018) and Orlando Pirates (2021). He left The Brazilians in November 2021. He has one more goal than former Sundowns teammate Nyasha Mushekwi, all of whose strikes came in the 2012 season!

13 – Kaizer Chiefs have won the trophy the most times if you include all the years of the Nedbank Cup competition dating back to 1971. They have 13 titles, with Orlando Pirates next on the list with eight wins. Moroka Swallows, SuperSport United and Mamelodi Sundowns have five each.

15 – This year will mark the 15th edition of the Nedbank Cup since it was first played in its current guise in 2008.

24 – The most goals scored in the Nedbank Cup, or any professional game in South Africa for that matter, was the 24-0 hammering by Mamelodi Sundowns against Northern Cape fourth-tier side Powerlines FC in 2012. Sundowns led 10-0 at the break but ‘turned it on’ in the second period.

32 – There are 32 teams that take part in the Nedbank Cup – all 16 DStv Premiership clubs, eight sides from the GladAfrica Championship and another eight from the SAFA structures, which could be the ABC Motsepe League (third-tier) or SAB Regional League (fourth-tier).

80 – There were a total of 80 goals scored in the 31 Nedbank Cup matches last season, 10 fewer than in the 2020 campaign. That was likely to do with the fact there were no amateur teams in the competition.

97 – Mamelodi Sundowns have scored the most goals in the Nedbank Cup since 2008, a whopping 97 in 47 games, a little over two per match. Their numbers are boosted by the 24-0 victory over Powerlines FC in 2012.

2022 – The winner of the Nedbank Cup this year will be entered into the 2022-23 CAF Confederation Cup, where they will fly the country’s flag on the African continent.