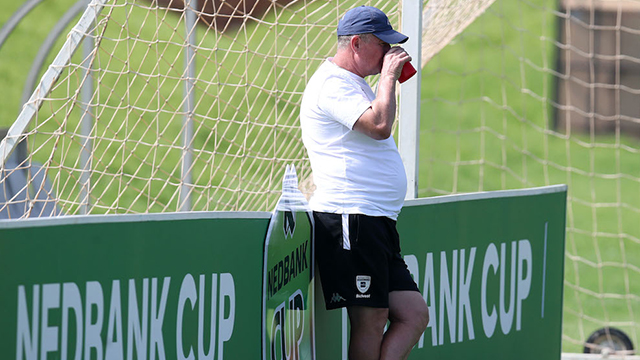 BidVest Wits coach Gavin Hunt admits it will be a “tough ask” for his side to overcome Mamelodi Sundowns in their Nedbank Cup semi-final, but wants to make up for his side’s final defeat in 2014 before he exits the club.
Hunt looks set to leave The Clever Boys at the end of the campaign after the club’s sale to Tshakhuma Tsha Madzivhandila, pending Premier Soccer League approval, and the Nedbank Cup decider could therefore potentially be his last game in charge.
In hunt’s first season with the club in the 2013/14 campaign, he led them to the Nedbank Cup final, but despite taking the lead over Orlando Pirates, they fell short in a 3-1 loss.

If they can get past Sundowns in this year’s semifinals, they will likely be perceived as favourites against either Baroka FC or Bloemfontein Celtic.
“We were in the Nedbank Cup final but unfortunately we lost. We are still in the semi-finals now,” Hunt said recently.

“We know that it is going to be a difficult ask. We have to do the best we can.”
He adds that he wants to qualify the club for the CAF Confederation Cup, even if he will not be in charge of the side to lead them in the campaign.

"We want to try and qualify for Africa again if we can. We did well this season to reach the group stage with our small squad. We have to pick up the pieces again and try to finish off well.”
With the PSL season hopefully set to resume in the coming weeks, Hunt admits he is unsure how his side will go in the remainder of the campaign after an unprecedented four months on the sidelines.

“We will see when we come back. Obviously, we haven’t had a training session. We will then see how we go.

“We’ve got professional pride to play for. We all know the situation, but it is important to treat the game with respect, play properly and do the right things.”
Hunt reached three Nedbank Cup finals in a row between 2012 and 2014, leading SuperSport to the title in the first of those, before a loss in 2013 with Matsatsantsa and then that Pirates defeat with Wits the following year.